Hey everyone! Lauren here to tell you about our journey from the North Island to the South Island of New Zealand.

After eating breakfast and packing up our things, Gerrod and I headed to the Wellington Ferry Terminal. It was sad for our journey on the North Island to come to a close, but I was very excited to do some hiking and see the mountains of the South Island.

We decided to get the South Island via a ferry across the Cook Strait on the Interislander. Interislander is the main ferry service across New Zealand's Cook Strait, between Wellington in the North Island and Picton in the South Island. We booked the tickets online, and they cost us about 80 USD. On our way to the ferry terminal, we were following Maps.ME navigation, and for some reason, it directed us to do what felt like an illegal u-turn.

After getting to the terminal in the somewhat illegal fashion, we unloaded our vehicle and checked it over to be returned. I watched our luggage as Gerrod returned it to Avis, and I felt somewhat sad since the car had been our trusty exploration companion for the last three weeks!

After checking our bags, Gerrod and I boarded the large ship. The interior was way more luxurious than both of us were expecting, with the boat being several stories, and having multiple restaurants and cafes. It almost felt like a cruise ship! We explored the different levels, before finding some interior seats on “deck 7”.

Chilling on the Ferry

Gerrod and I decided to work on our blog for a bit while we were on the ferry. The journey across the Cook Strait takes 3 to 3.5 hours, so we had plenty of time to relax before we got to the South Island. We got a little bit of work done, but I started feeling really nauseous.

I attempted to solve this by getting a hot chocolate and shortbread cookie from one of the cafes on board, and it surprisingly made me feel I little better. We had a few other snacks, and then decided since we were headed to the scenic South Island, we should watch Lord of The Rings Return of the King!

Our Airbnb host told us before we left that we should be outside for the last hour because there were great views in the sound, so Gerrod and I paused our movie and headed outside around 11 am. We first went to the top deck, and although there were great views, there were tons of people and it was difficult to get a good picture of the scenery. So Gerrod went to checkout out the lower deck to see if there were fewer people.

He found a good spot on deck 8 with beautiful views, but it was shaded and pretty chilly! Luckily we were prepared with our coats, so we put on our jackets and stayed here for the remainder of the ferry ride.

When we arrived in Picton, we waited until it was the pedestrians turn to get off the ship, and then headed to grab our checked luggage. The luggage pick-up was just like an airport; it used a conveyor belt. After finding our bags on the conveyor belt, we headed to Avis to pick up our rental car. 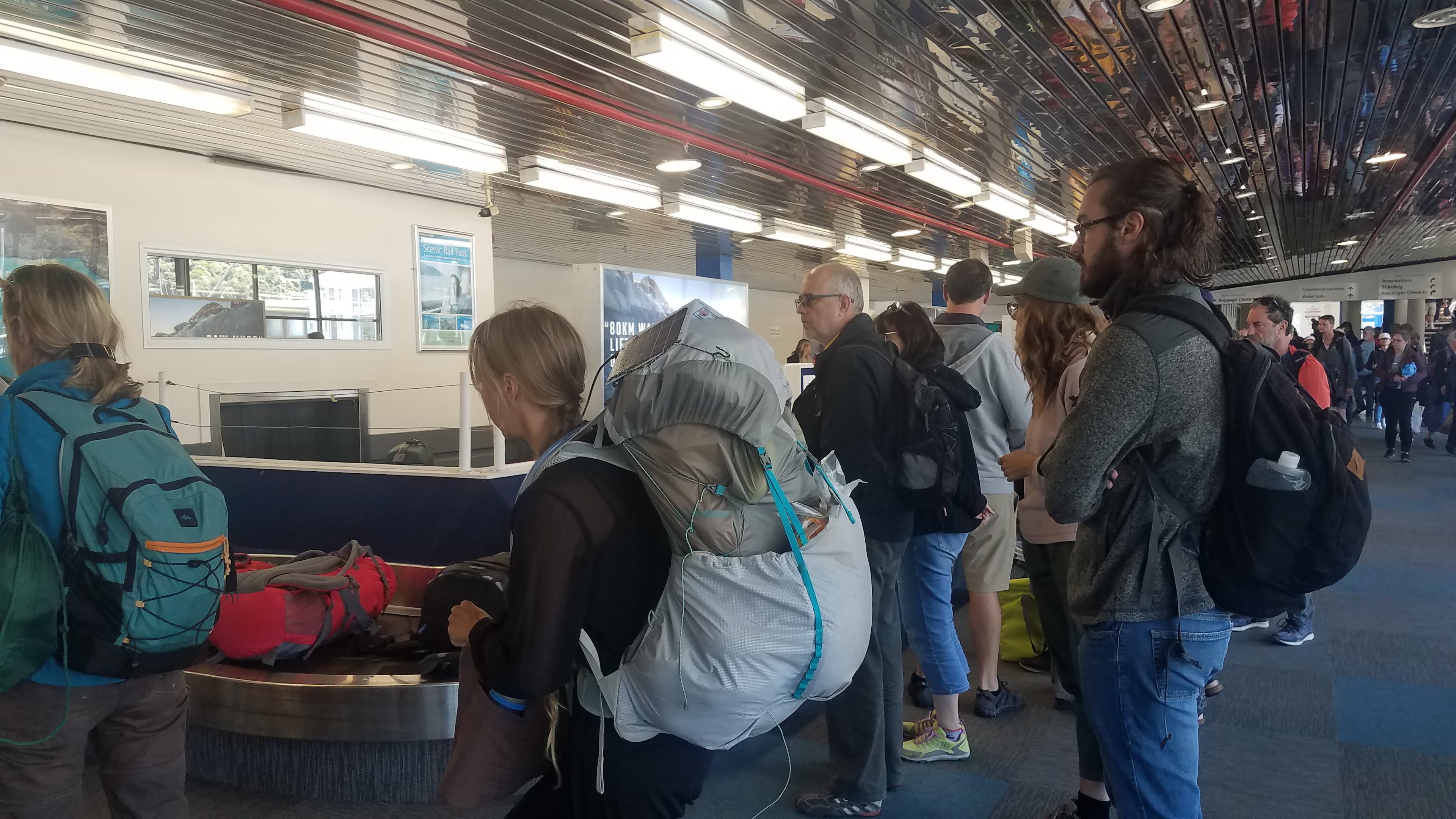 There was a very long line outside of Avis, but luckily Gerrod had no issues. Funny enough, we got the EXACT same color, make, and model car as we had for three weeks on the North Island. I think every time I see a Grey Toyota Yaris now I will think of New Zealand!

We were worried we would have issues picking up a rental car, and didn’t have any accomodation booked for our time on the South Island since we didn’t know how much driving time we would have! So after picking up our car, Gerrod and I headed to the Picton Library to use their wifi and get something booked.

We were looking for something along the west coast since I had read online that it had gorgeous views and ended up booking a place called Charleston Holiday Park which is located about 20 minutes north of the Paparoa National Park.

We then headed to the west coast in our luxurious rental Toyota Yaris! The scenery at the beginning of the drive was mostly vineyards, with rolling hills in the distance. As we got further and further on our drive, there were even more mountains.

About 2 hours into our drive, we decided to stop at Lake Rotoiti in Nelson Lakes National Park to stretch our legs. We walked for a bit along the Brunner Peninsula Nature Walk and took in the scenery before continuing our drive.

We finally arrived at our accommodation around 7 pm and prepared ourselves for the next day by finishing the Return of the King. The scenery on our drive was incredible, and had me so excited to see more of the South Island!

Hey everyone! Lauren here with part 2 our time in the deserts near of Calama and San Pedro de Atacama, Chile...

Sippin' on Tereré with the Fam in Paraguay

Hey people! Gerrod here again to pick up where I left off from the last post we made. This time, we will be sharing our experience in Paraguay with our cousin Liz...