Following our goodbyes, Gerrod and I retrieved our bags from the pier and headed towards our hostel, Hostal Vista Al Mar. It was too early to check in, so we left our bags and headed to go to dive shops to look into diving the next day. There are so many dive shops and they were all similarly priced (two dives for $170 dollars, which is quite expensive), so it was difficult to choose which one to book with! We ended up booking two dives for Wednesday with Academy Bay Diving based on a recommendation from a friend, and tons of positive online reviews. After booking our dive for the next day, we headed back to our hostel to go to our room and sort our clothes so we could do laundry. The laundry service was a drop off type deal where they weighed your clothes and you paid based on how much your clothes weighed. The remainder of our Tuesday consisted of relaxing and organizing our clothes after we retrieve them from the “lavandería”.

We woke up the next morning, bought some fresh made bread from a local bread shop, and headed to the dive shop! The dive shop had everything put together, so we just hopped in one of the pick-up trucks and headed to the ferry on the northern side of the island to get on the dive boat. We got to see a lot more of the island on the drive over, and it was much greener than the islands we had seen on our cruise.

After we got on the dive boat, they rode to North Seymour island where we were debriefed on the plan for the day. Since Gerrod, me, and another girl on the dive tour had less than 30 dives, the divemaster made us hop into the water pre dive and double check some of our skills. After checking our dive skills, we got back on the boat and headed to Mosquera Island. We had been to the island during our cruise, and it was interesting to see it from land, snorkel, AND diving! As soon as we got in the water, we saw a school of rays! The water was pretty murky but we still got to see rays, a shark, turtles, garden eels, and tons of starfish. After finishing our dive, we got back on the boat and were provided with lunch. After lunch we headed to North Seymour Canal for our second dive. This time as soon as we got in the water, we saw a hammerhead shark! I wish we got to see it up close, but It was cool to see anyways. North Seymour had tons of schools of fish, eagle rays, and whitetip reef sharks. The sensation of being underwater will never cease to amaze me. 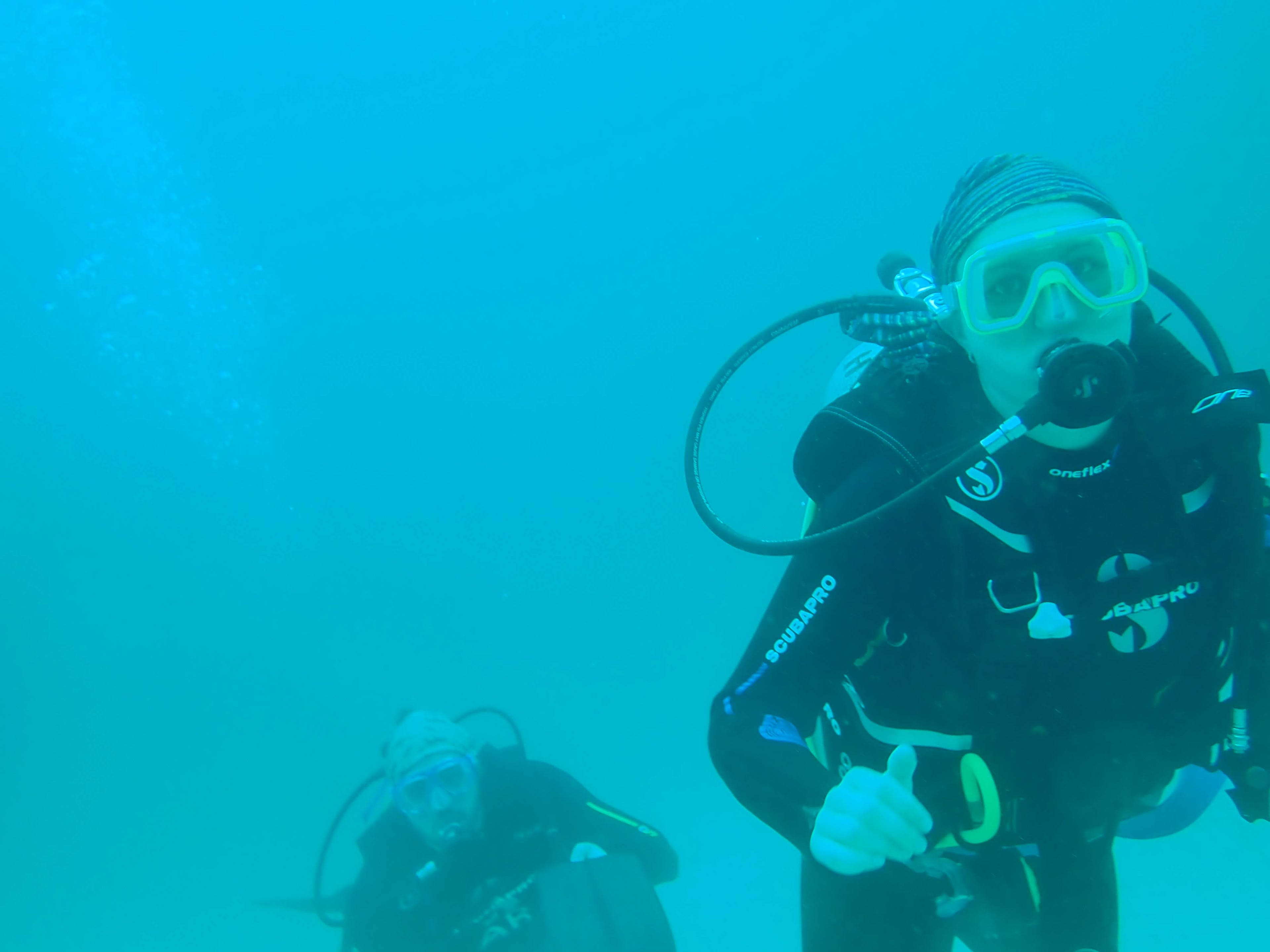 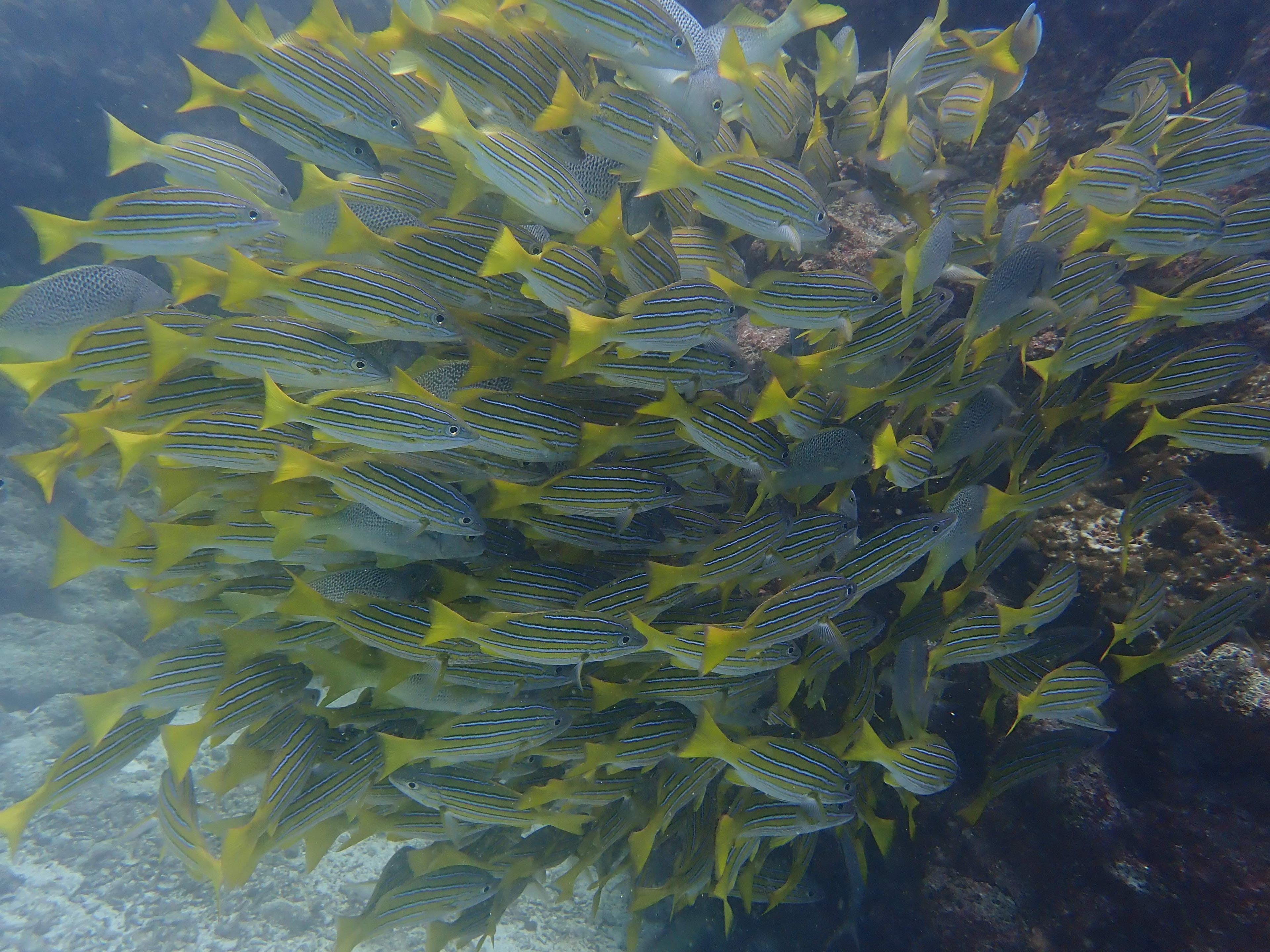 Following our dive, we headed back to Puerto Ayora. It was only 2pm, so Gerrod and I decided to walk to Tortuga Bay, a beach our hostel owner recommended to us. The walk to about 30-45 minutes, and most of it was a nice pedestrian only walking path. The beach was gorgeous!! White sand, and not very steep at all! The waves were really rough, and there were signs everywhere indicating not to swim in the water. We ran into the Australian couple from our cruise on the beach, and they said that there was one lone surfer braving the rough waves. Gerrod and I took a stroll down the beach, and noted several washed up jellyfish and a sea turtle nest!!!! At the end of the beach there was a segment that turned off to the right where there was a white sand cove beach with calm water. I decided to take a swim, but Gerrod was too chicken because he was dry. Following our beach walk we went to the grocery store to buy food in an attempt to save some money. I had a high quality meal of a can of beans for dinner, and Gerrod ate a ham sandwich and some of my beans. 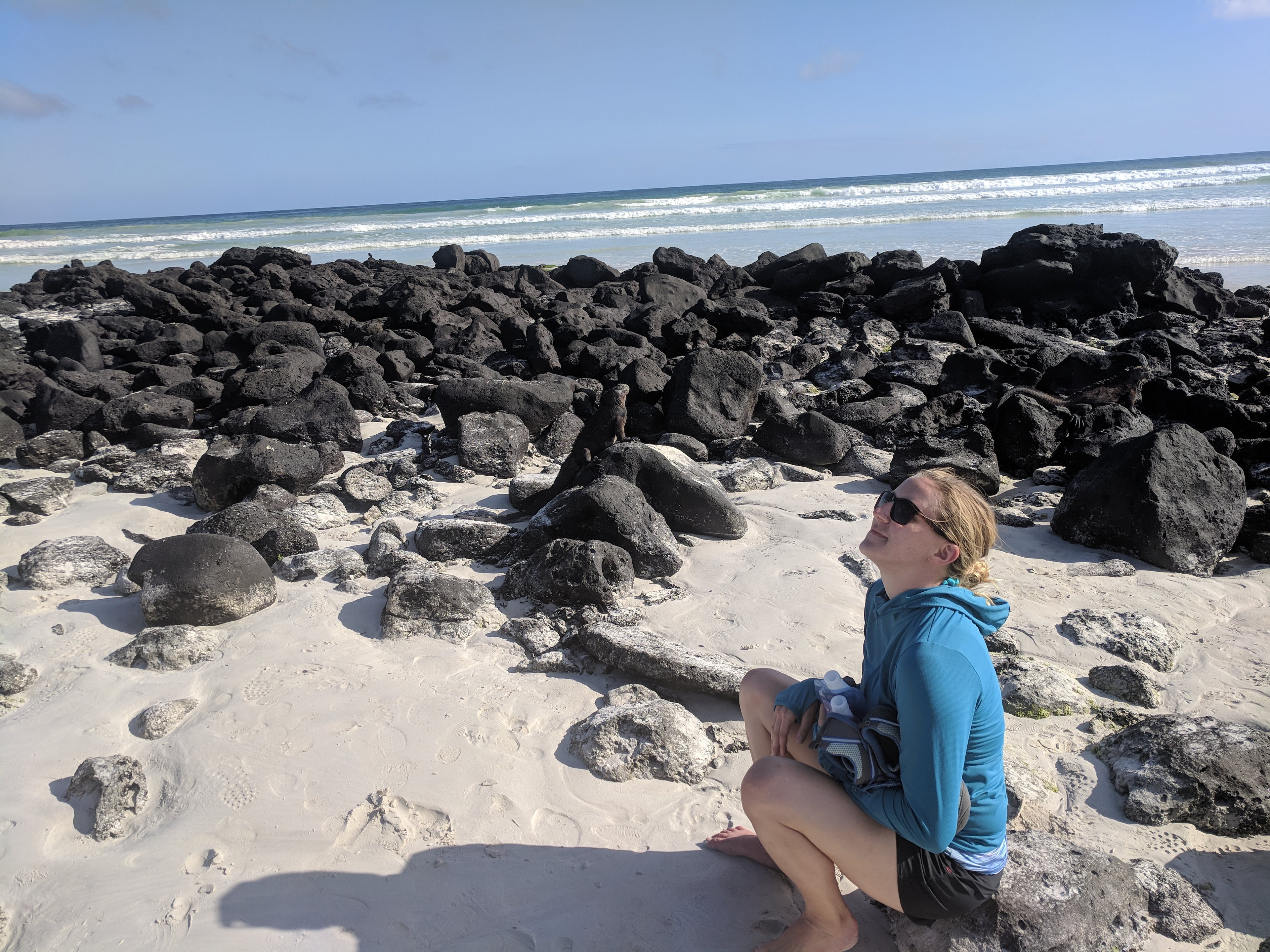 The next morning we slept in, as it was GERROD’S BIRTHDAY! After breakfast, we headed to a fancy coffee shop in town that we had previously passed called 1835 Coffee Lab. We both got a Galapagos Blend bean in different preparations methods. It was really cool to compare the the french press with something called the clever. The coffee was delicious.

Our hostel had bikes that we were allowed to use for free, so we decided to take the bikes to the lava tunnels. Our hostel owner indicated biking to them would suck a lot because it was all uphill and he showed us on a map where to take a local bus that you could bring a bike. He showed us how to bike to more low-key place to see lava tunnels within a giant tortoise reserve called Reserva El Chato from the bus stop in a small town called Santa Rosa. We grabbed the local bus, and followed the directions our hostel owner gave us. We got to a fork in the road, and I insisted our hostel owner said to go to the left, but there was a sign indicating the tortoise reserve and tunnels were to the right. We followed the signs directions and headed down the gravel path. It was mostly downhill, and we saw several giant tortoises during our ride. When we got to the end of the road, there was a restaurant... and no tunnels. So we argued a bit and then started walking our bikes back up the hill towards the fork in the road. Our bikes would not shift gears at all, and the air was a little low so it was very difficult to bike up the hills! We finally got back to the fork in the road and headed to the left. We got stopped by a guy who said something in spanish about the cost being 5 dollars a person for the giant tortoise reserve. We were pretty low on cash, so we asked him if the tunnels were this way, and he indicated yes they were! We decided to only see the tunnels since we couldn’t afford the reserve. We got to the tunnels, and ran into the girl from the Netherlands from our cruise! The tunnels were awesome, and were well lit. After we walked through the tunnels, we headed back towards our hostel. The guard stopped us again, and apparently we misinterpreted what he said, because the tunnels were included with the price of the reserve... Oops. We gave him all the cash we had ($6), and rode the mostly downhill, 20km trek back to Puerto Ayora. 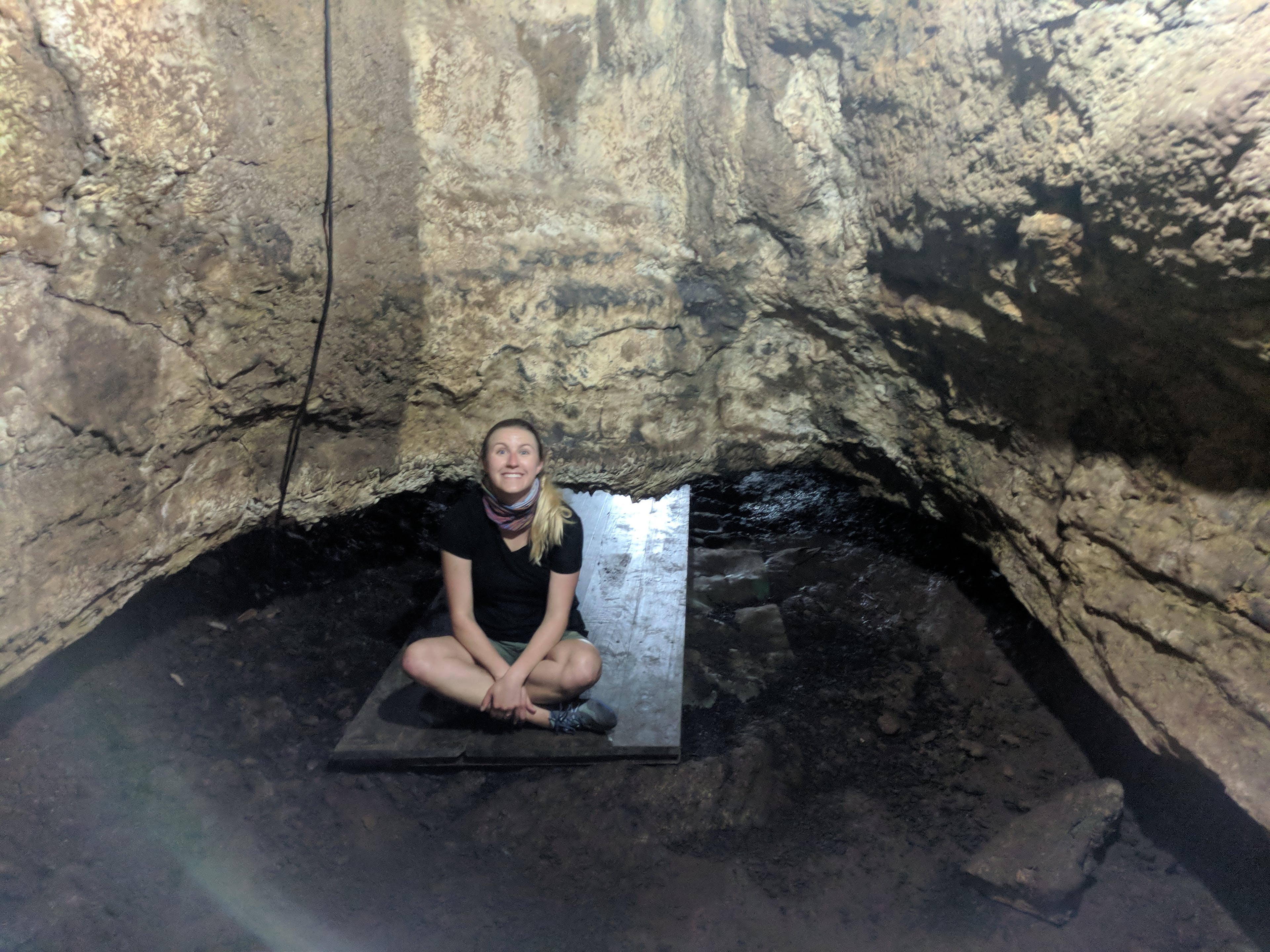 Following our bike ride, we relaxed until dinner time, and then headed to Charles Binford Avenue, where there are tons of local kiosks with fresh seafood. During the day, there are cars driving along the road, but at night the kiosks set up long tables in the middle of the street and there are people everywhere! We had a lobster dinner for two (only $20!), with a few mojitos, and ice cream. After dinner, we went to a local bar call Bongo Bar, which we had heard from tons of people that it is the hip cool bar. The girl from Holland and her friend from Germany met up with us and there was live music. I was convinced to get up on stage and sing in front of everyone after the bar owner tried to get Gerrod to sing. Following drinks, we went to the pier where we saw baby sharks swimming in the water!

We were both very sad to leave the Galapagos next day. There are truly stunning, and you could spend years on the islands before you truly saw everything. Hopefully one day, we can make a return trip!

Some links to stuff for fun:

Hey everyone! Lauren here to tell you about our journey from the North Island to the South Island of New Zealand...

Hey everyone! Lauren here with part 2 our time in the deserts near of Calama and San Pedro de Atacama, Chile... 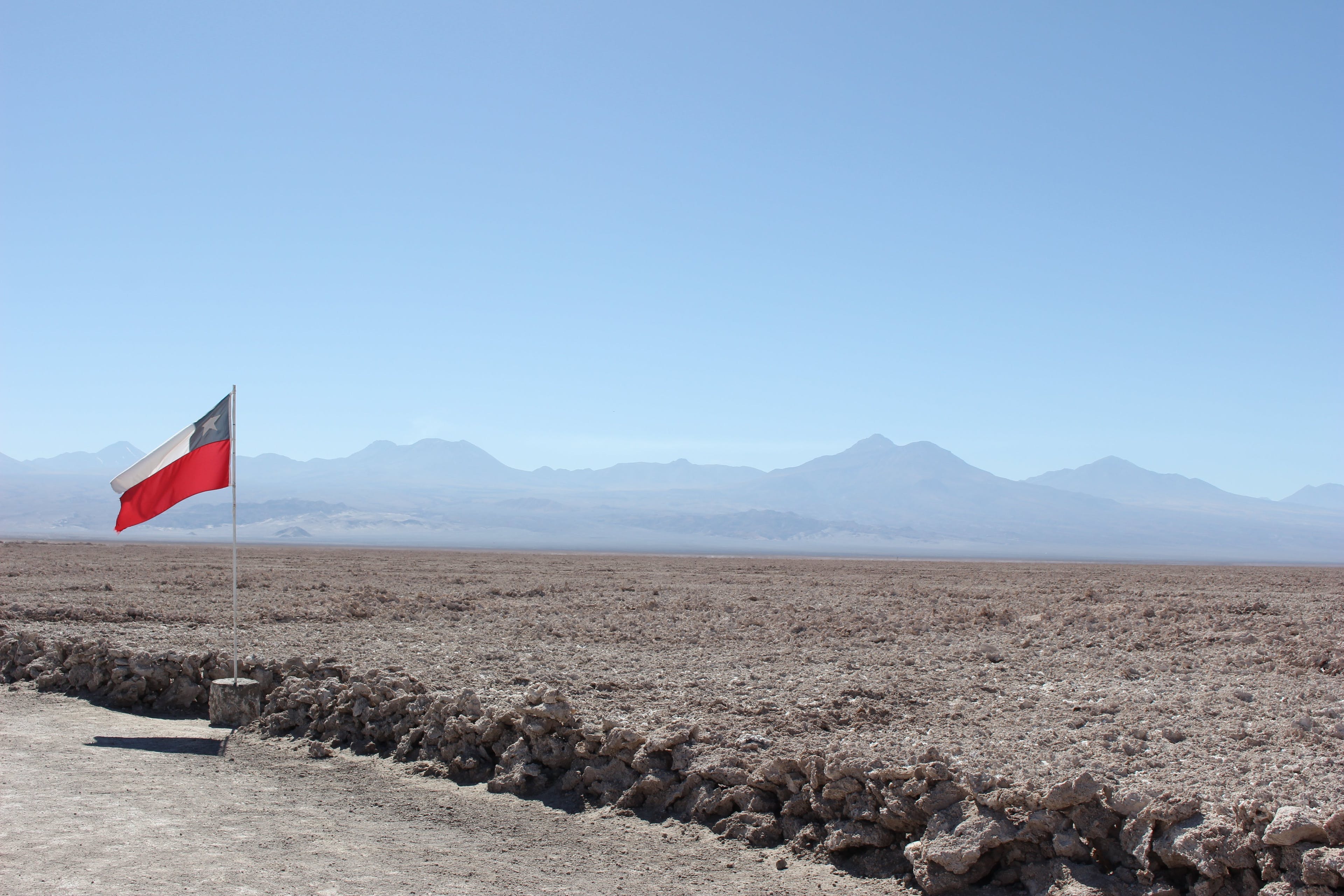